On March 22nd, 1949, Raymond C. Hand founded Ideal Distributing in Clarksville, TN and began selling cases of Oertels ’92 out of a single truck. Seven years later, Ideal was awarded the distribution rights for Anheuser-Busch in an eight-county area surrounding Clarksville and an explosion of growth followed.

After Raymond C. Hand passed away in 1961 his son, Charles W. Hand took the reins. Under Charles’ leadership, the second generation distributor experienced exponential growth and by 1986, had sold over one million cases.

In 2003, Charles's son JR became the third generation of the Hand family to lead the company. As President and CEO, JR spent the next decade expanding the newly dubbed Hand Family Companies into Kentucky and Illinois, opening branches in Hopkinsville, Chattanooga, and Chicago.

We’ve come a long way since that old pickup but even with all the growth, Hand Family Companies remains dedicated to faithfully representing our breweries and providing unparalleled customer service – a vision that Raymond C. Hand set in motion over six decades ago.

Get to know our beverage portfolio!

Learn more about the breweries and cideries we represent. 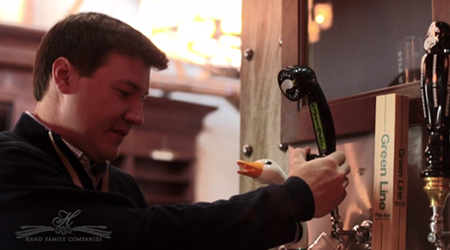