Excerpts From The Journal Of Grant Pauly, 3 Sheeps Brewing Co.

18:00 | Productive day. Kegs were cleaned, beer was bottled and packed for delivery to our Halloween party in Chicago. About to call it a night. Note to self: ask Matt why he's carving a giant wooden sheep statue... and why he feels a chainsaw is the most appropriate tool.

18:03 | Found an IV bag in my office while packing up. $100 says it's part of Matt's crazy Halloween costume. That dude is so weird! Wish I'd brought an umbrella, it's looking pretty bad outside.

18:05 | Writing this in the dark. Lights went out. Loud noises downstairs. Heading down to check it out.

22:40 | It's late and I'm five miles from the brewery. Hiding with a keg in the middle of the woods. It took a while for my hand to stop shaking enough to write this down. But I need to write this down. What I saw must be recorded. To be preserved. Here goes...

There was an attack at the brewery. A zombie sheep attack. It's so strange it almost seems poetic -- after all we've done to raise the profile of sheep in this country, they chose OUR brewery to launch their assault on humanity.

I won't go into the details -- they're too hard for me to relive -- but I will say this: Good men and women died today. Bad sheep died too. How did I survive when so many others didn't make it? Turns out I'm immune. I got bit and... survived. I'm the cure - my blood holds the antidote. And now this keg holds the antidote.

And I will deliver the antidote. I will push through the wilderness, journey over field and pasture to bring this life-saving keg to the people of Chicago. I cannot stop because the zombie sheep are in hot pursuit. If there's a silver lining to this tragedy, it's that I have been given a purpose. One mission before I succumb to the sheep: Deliver the keg, save the world.

If you're reading this, come to the Logan Theatre on October 30th. Help me drink this beer (I'm calling it Violence of The Lambs.. it seems appropriate) and distribute the antidote to Chicagoans and then to the world.

Together we can stop the zombie sheep apocalypse!

Violence of the Lambs

At the end of the world, there will be beer. Help us welcome 3 Sheeps Brewing founder and brewmaster Grant Pauly as he finishes his journey to Chicago with a keg of beer that may or may not contain the antidote to the zombie sheep apocalypse. Enjoy plenty of 3 Sheep offerings, enter our costume contest, meet the 3 Sheeps team and catch a screening of Black Sheep, the world's only zombie sheep flick on the big sreen. Entry to the event is free and tickets to the movie screening are $8.50 and can be purchased HERE.

In addition to 3 Sheeps Brewing's flagship Really Cool Waterslides IPA, we'll be featuring bottles of Cashmere Hammer Rye Stout, and the one-night-only beer brewed just for the event, Violence Of The Lambs, a blood red version of Rebel Kent The First.

Because it's Halloween, we'll be hosting a costume contest. One lucky winner will be deemed "Best Dressed" by the 3 Sheeps team and will receive a $50 gift card to the Logan Theatre, some killer 3 Sheeps glassware and a 3 Sheeps Swaaag Baaag.

At 10:30, we'll be screening Black Sheep (and not the one with Chris Farley). We really couldn't explain it any better than the official synopsis: "An experiment in genetic engineering turns harmless sheep into blood-thirsty killers that terrorize a sprawling New Zealand farm."

Enjoy your pint of Violence Of The Lambs while witnessing some violent lambs onscreen. Hooping and hollering encouraged. 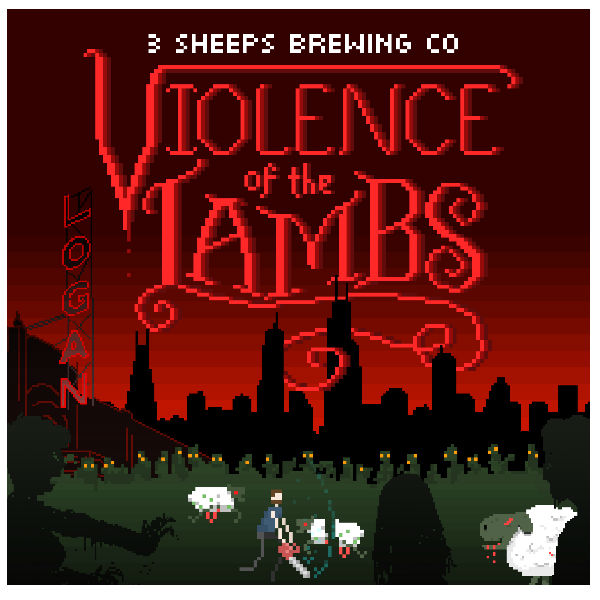