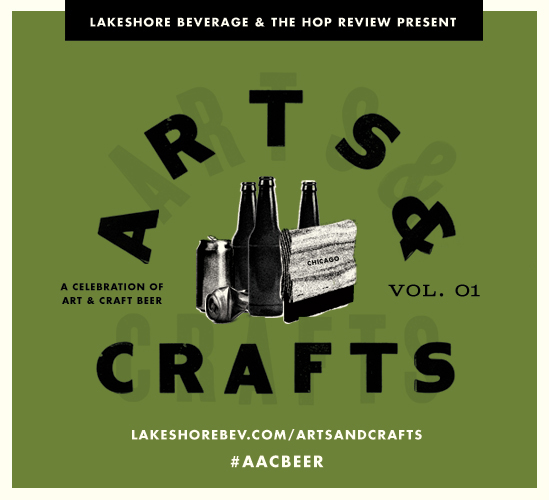 Arts & Crafts is an event series in partnership with Chicago beer bloggers, The Hop Review that celebrates art, craft beer, and the cuture that ties both together. At each event, guests will meet local Chicago artists at the top of their craft and learn about their process while enjoying beer from some of the country's best breweries.

In this installment, we'll gather at Logan Square's Galerie F to learn about screenprinting with Chicago artist Nate Azark. In addition to a live demonstration, each guest will receive a one-of-a-kind print designed by Nate specially for the event. We'll also enjoy craft beer cans from Brooklyn Brewery as we spend time amongst Galerie F's collection of silkscreen gig posters, art prints and street art.

Tickets are $15 and five beer samples from Brooklyn Brewery and a one-of-a-kind Nate Azark print designed exclusively for the event.

*Please note that food will not be served at the event but there are plenty of fantastic places to eat before or after within walking distance of Galerie F.

The Hop Review is a Chicago beer blog that produces in-depth pieces about the state of craft beer. Jack, Tom, Robert and Nick sit down with some of the area's best brewers, shop owners, distributors and brand managers for deeper insight into their unique take on beer.

Nate Azark is a Chicago designer with 12 Line studio, a full service creative studio in Chicago working with clients both large and small.

Founded in 1988 by Steve Hindy, a former journalist and Tom Potter, a former lending agent at Chemical Bank, Brooklyn Brewery has been crafting innovative and exceptional beers for over a decade. Under the leadership of James Beard award-winning Brewmaster Garrett Oliver, the brewery is committed to supporting local art and culture wherever they go.

Check out what we're doing at this year's Chicago Craft Beer Week!