When the clock strikes five pm, Chicagoans head home from the office and stop at their neighborhood bar for a quick post-work beer. What kind of beer that is, however, varies by neighborhood- and in honor of Chicago Craft Beer Week May 14-24, we decided to investigate what kind of beer your neighbors are most likely to be drinking.

In our exploration, we analyzed a year’s worth of sales data from thousands of bars, restaurants, liquor stores, grocery stores, and anywhere else that sells beer. First, we went to the data to determine the averages for consumption of each style of beer throughout the entire city of Chicago. Then, we compared the Chicago-wide averages to the percentage of one style of beer sold in one neighborhood, which allowed us to find what styles of beer that neighborhood proportionally prefers. Here’s what we found:

Whether it’s a perfect day for America’s favorite pastime or it’s one of Chicago’s signature tough winter nights Wrigleyville residents celebrate (or commiserate) with a Kolsch style beer, such as a Summit Summer Ale. And while stereotypes of Wicker Park residents might suggest that they only drink craft beers that other drinkers aren’t “in the know” about, it turns out that Wicker Park residents prefer Kolsch style beers, just like the citizens of Wrigleyville.

On the west side of the city, Logan Square and Bucktown both prefer porters, pairing their meals with beers like a Founders Porter or possibly a Sierra Nevada Porter. Does this mean that porters and other dark beers (such as stouts) have begun to replace IPAs as the preferred craft beer of craft beer lovers?

Across Chicago, cider is the favorite beer style in the most neighborhoods- fifteen, in fact, including Englewood, Humboldt Park, and Little Village. The reason for cider’s popularity can probably be attributed to the growth of Cider as a popular style. Craft brewers have also been branching into cider, and craft cider brewers such as Virtue Cider and Widmer Bros. have developed followings among beer enthusiasts.

Whether you’re a cider drinker or craving a porter, you can find the closest bars, restaurants, or liquor stores that sell your favorite beer by using this beer finder tool. With the most up-to-date data, you can quench your thirst at a nearby watering hole or discover which of your local liquor stores stocks your favorite beer. We’ll raise a glass to that. 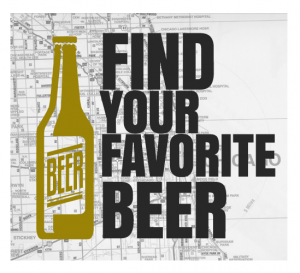