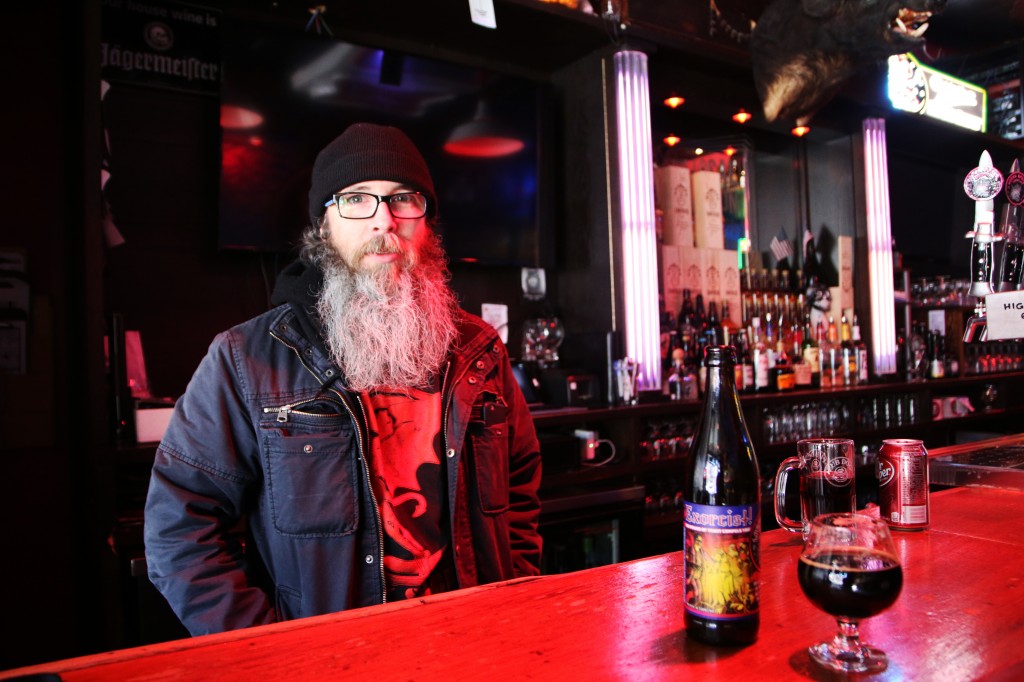 Every time I see Local Option Bierwerker’s Tony Russomanno he asks me one thing, “Tanaka! How’s your metal?”

Today is no exception.

I’m sitting across the bar from Tony and Local Option’s Brand Ambassador Alexi Front to taste their newest bottle release, Exorcist, and learn more about what might be the most metal brewery in America.

Origin Story: From Craft Beer Bar to Collaborators to Brewers 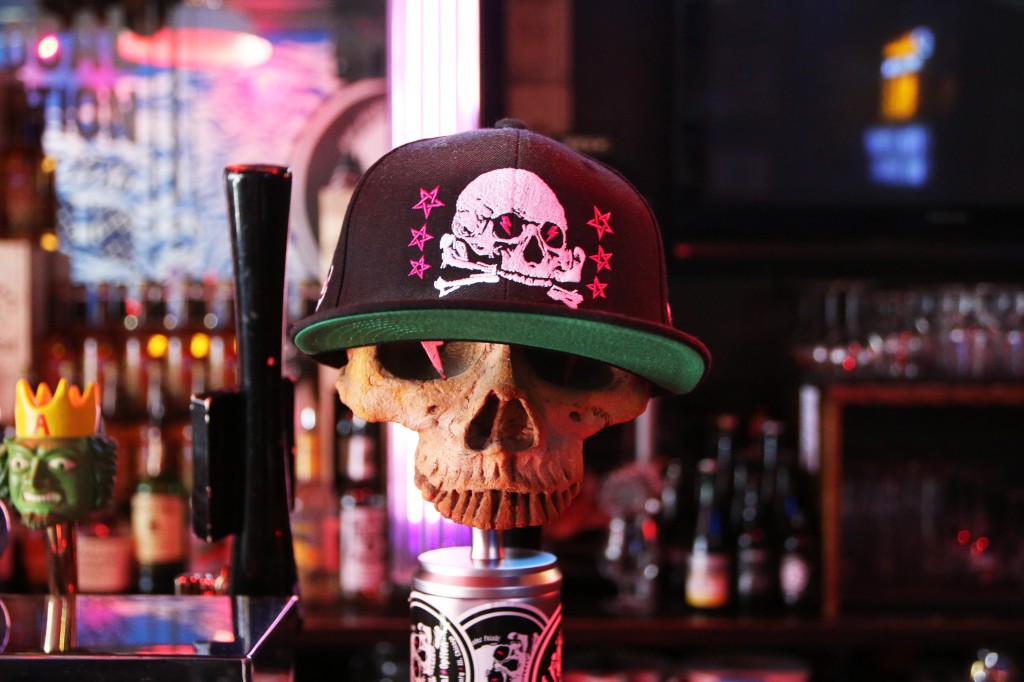 Local Option Bierwerker is a brewery from the darkly creative mad men behind the Local Option bar in Chicago’s Lincoln Park neighborhood. The story of their journey from beer bar to brewery is one of gut decisions, experimentation, and community. In fact, as they tell it, it’s something they just sort of fell into. Tony explains, “We’re just some very lucky people who have had great opportunities to express ourselves through beer because we’re fortunate enough to have good friends in the industry that allow us to use their equipment to brew it.”

“We’re just some very lucky people who have had great opportunities to express ourselves through beer because we’re fortunate enough to have good friends in the industry that allow us to use their equipment to brew it.”

In 2010, Tony and the Local Option team did a few collaborations with their friends at their favorite Midwest breweries and began to experiment with some homebrews of their own. Eventually Brian Ewing from 12% Imports tasted a homebrewed version of a Dampf Bier and liked it so much he asked them to brew it commercially. “We were like, okay… we don’t know where and we don’t really know how” recalls Alexi, “Brian told us he had this dude at Stillwater who’s making beer in Maryland and that he thought he could get us some time there.”

This beer would eventually become their first commercial batch and would mark the official beginning of Local Option Bierwerker.

Bringing Lost and Traditional Beer Styles to The American Palate 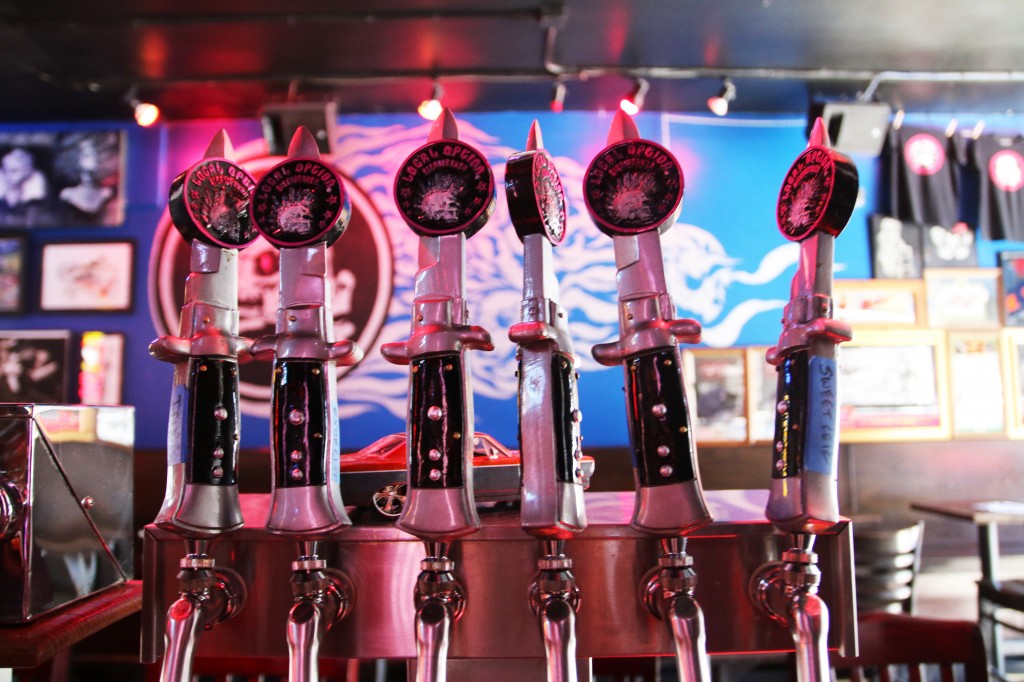 This first batch — Dampf Loc is a Dampf Bier, a Bavarian peasant style of beer that was essentially non-existent in modern times. It was historically brewed out of necessity because the German brewers observed the Reinheitsgebot (German Beer Purity Law which limited the ingredients brewers could use to make beer to water, hops, and barley). They were brewing with all barley and Nobel hops because those were the ingredients available to them. As Alexi tells it, “we thought it was a very unique flavor and we wanted to expose lost or traditional styles like Dampf Bier and make them fresh on American soil. We wanted people to experience these styles made in accordance to tradition as opposed to American interpretations that they’re used to.” 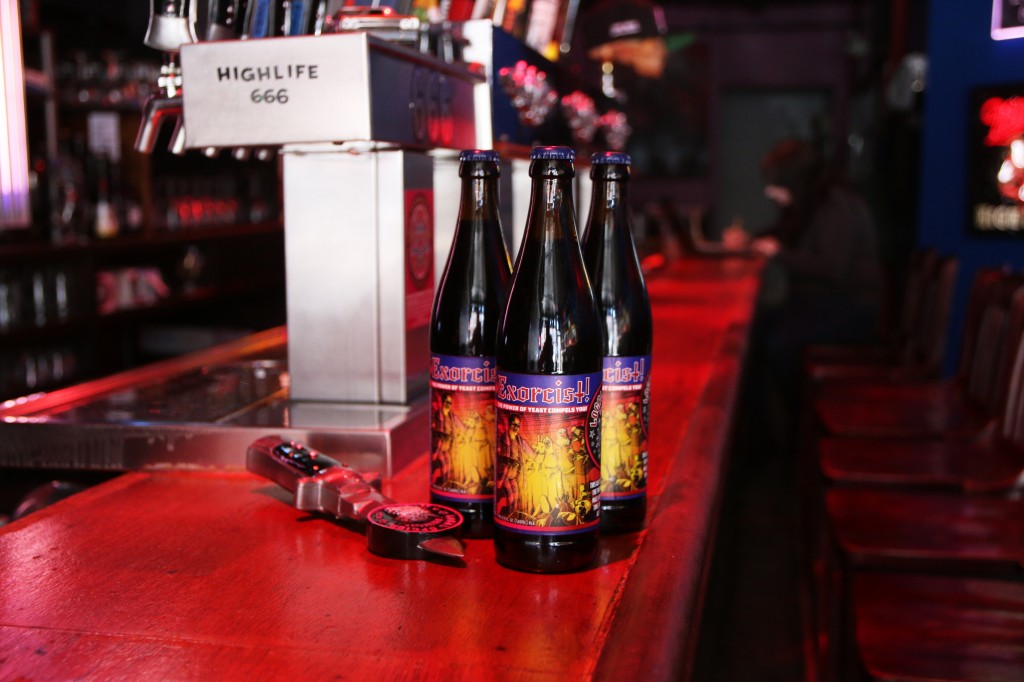 “Exorcist is a fun beer,” Alexi says as he pours a glass, “it’s our first stout.” Exorcist is a foreign extra stout, a dark, robust beer with strong hop presence and roast qualities. Alexi explains the style’s origins, “The story of this style is similar to the IPA story. Brewers made the beer stronger to withstand a long overseas journey. In our humility, we decided to tone it down a bit and keep our version at 8.5% ABV.”

“The story of this style is similar to the IPA story. Brewers made the beer stronger to withstand a long overseas journey. In our humility, we decided to tone it down a bit and keep our version at 8.5% ABV.” 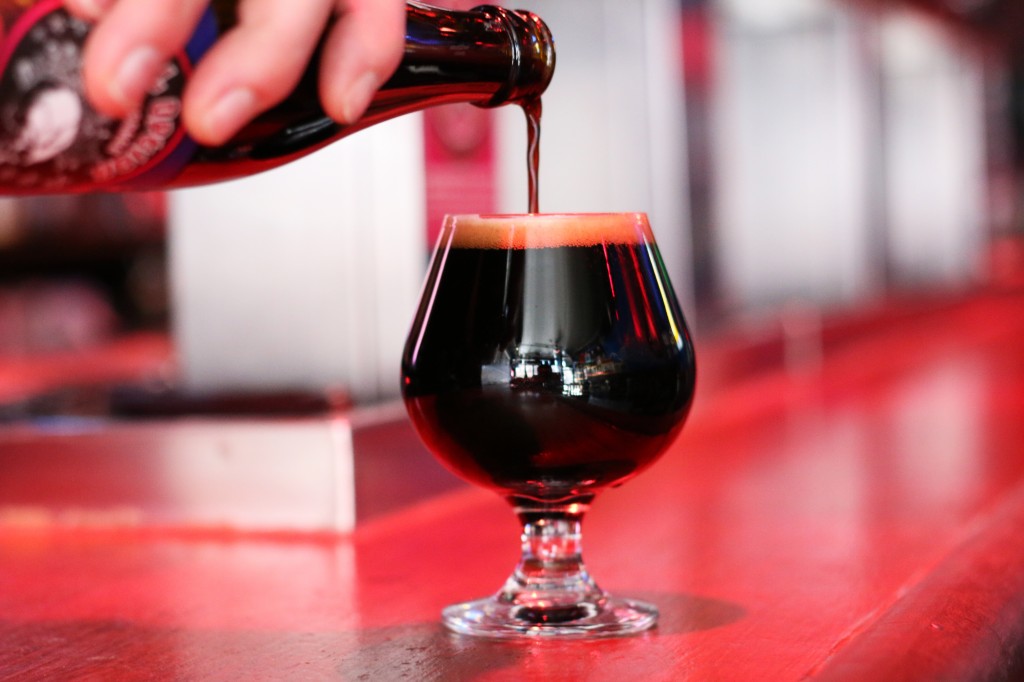 Alexi’s Tasting Notes: It pours with a nice big brown head, very sticky with good lacing. Due to the use of Pacific Jade hops from New Zealand, it has a lot of exotic fruit notes to it, especially on the nose. There are big roast qualities – coffee, chocolate bitterness, a slight bit of spice, and an extreme hop profile. Exorcist is also on more of the dry and bitter side. 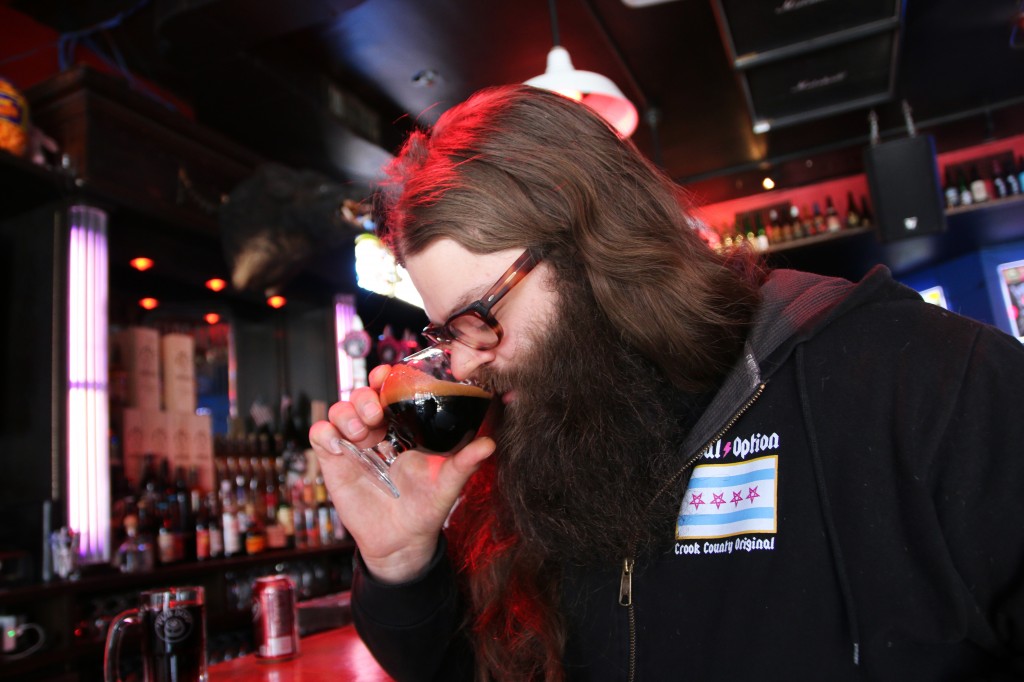 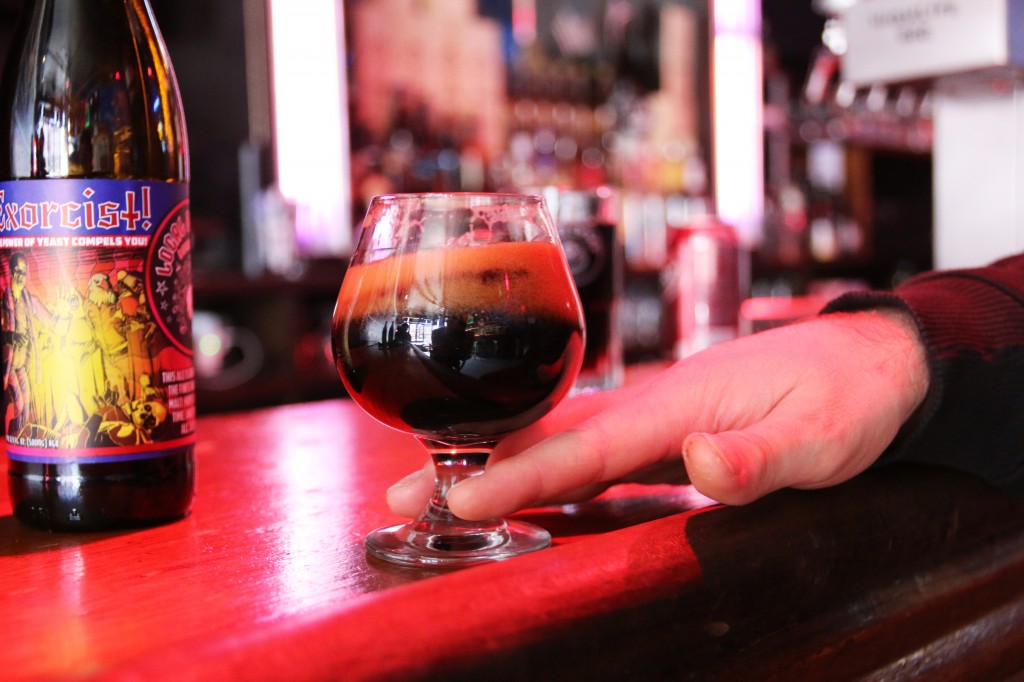 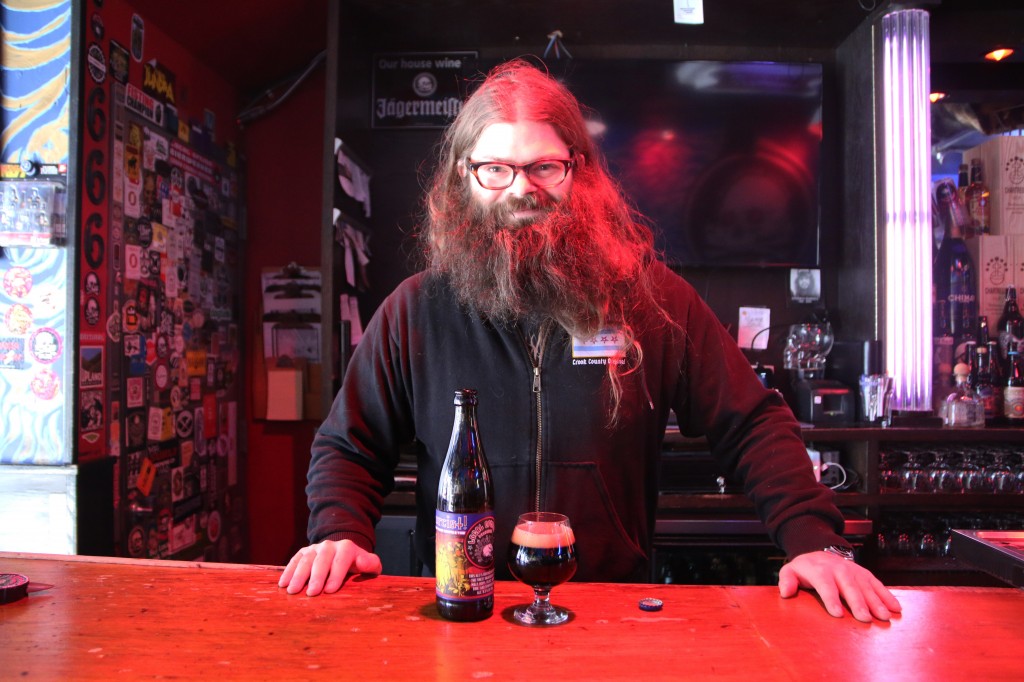 The Story of Leif: The Most Metal Bottles On The Shelf 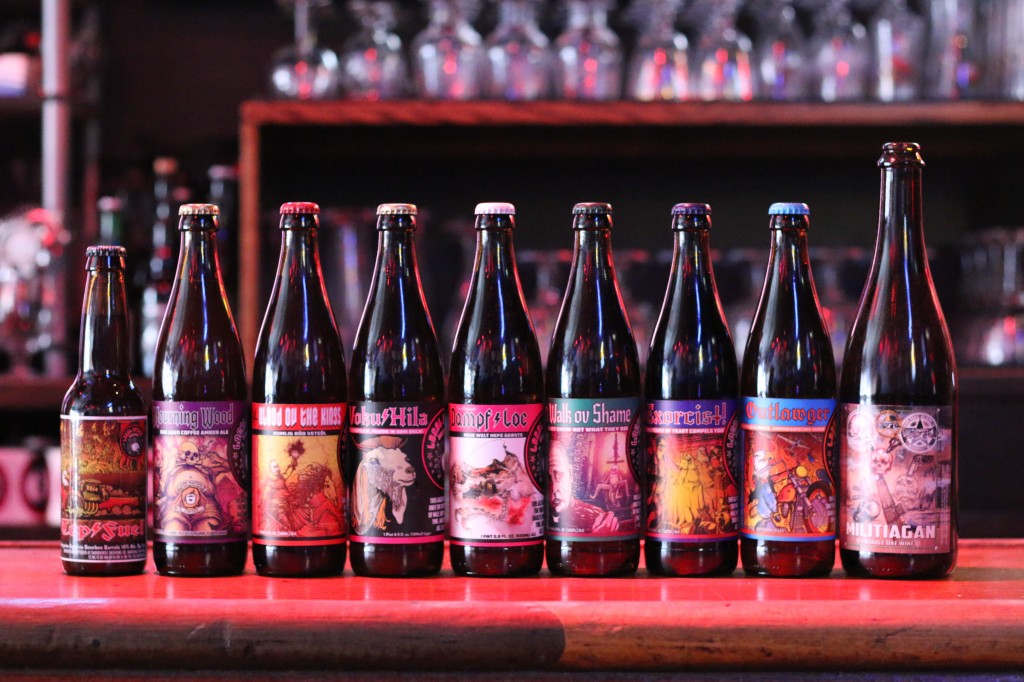 Local Option Bierwerker’s labels are, well, memorable. Exorcist depicts a renaissance-era priest in full robes standing over a man with a skull for a face, presumably performing an exorcist as a group of terrified nuns look on. It’s far from subtle. 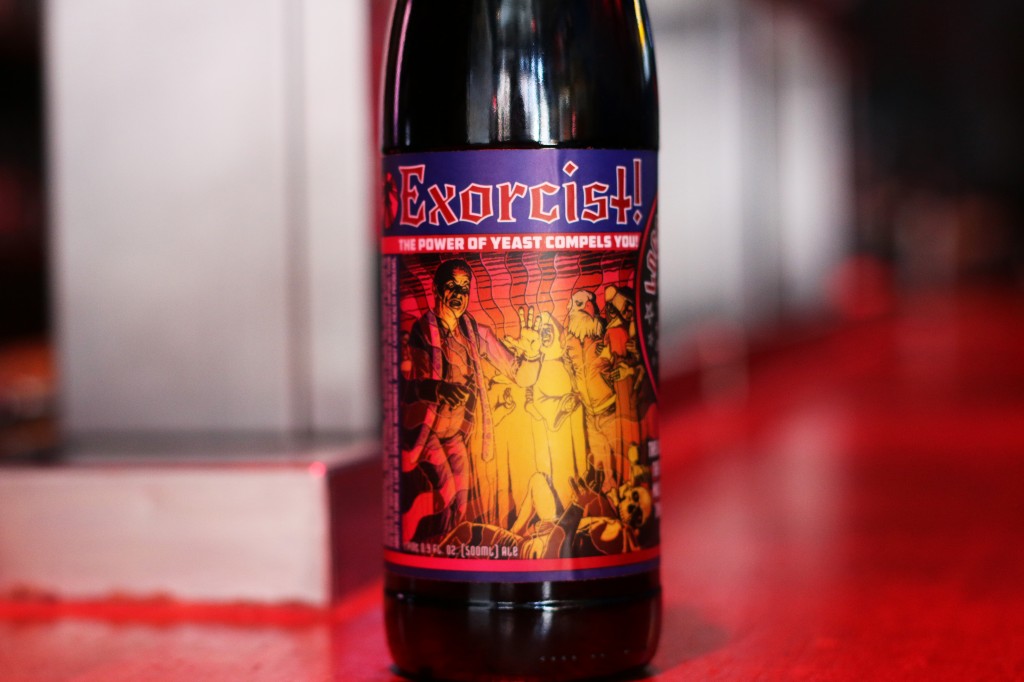 All of the Bierwerker’s labels are done by the Swedish artist Axel Widén a designer and vocalist in a number of metal bands in Gothenburg. Alexi explains the choice, “when we started to brew our beers commercially, I couldn’t think of anyone else better to work with us. We needed someone who really understands our story and who we are as people.”

There’s also a story that links all of the labels together that features a cast of recurring characters, each more insane than the last. I ask Tony for a summary of the story, “basically, a baby named Leif is born to a family who takes him at a very young age to a Meshuggah concert where his face is literally melted off by the metal that is known as Meshuggah. The metal is so powerful that it enters the baby Leif and gives him super natural powers. At first, people think he’s going to die because he has no face but they eventually start to see what he can do.”

Each bottle label depicts a different piece of the story that unfolds as the faceless baby Lief grows up, befriends a half eagle, half man named Motor Hawk and eventually plots the demise of the world’s strongest source of metal – Local Option Bierwerker.

For a really interesting half hour, corner Tony or Alexi at “The Option,” order an Exorcist and ask them to tell you the story of Leif.

“German Beer Purity Law which limited the ingredients brewers could use to make beer to water, hops, water and yeast”

Oops, that’s what we get for drinking beer while we write…

No problem, Matt. I can empathize