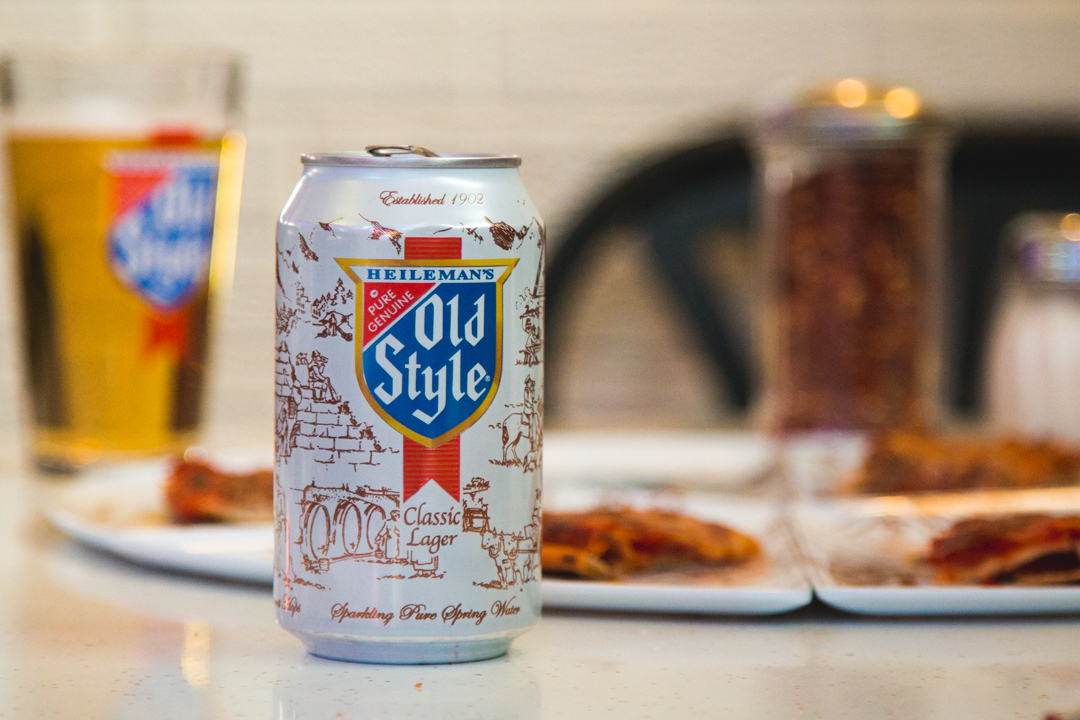 Serving Old Style Since Day One

Chicago is best known for several things and it’s not hard to see that pizza is one of them. There are hundreds of spots throughout the city to grab a slice of our beloved pie — whether it’s thin, deep-dish, or medium crust. And down at 84th and Pulaski stands one of the true legends of Chicago’s pizza scene: Vito & Nick’s. Specializing in thin crust pizza, Vito & Nick’s has been around for nearly 100 years and has been pouring Old Style beer “since day one.” We sat down with third-generation owner and operator, Rose George, to talk about pizza (duh), running a family business, and how she can spot a north sider a mile away. 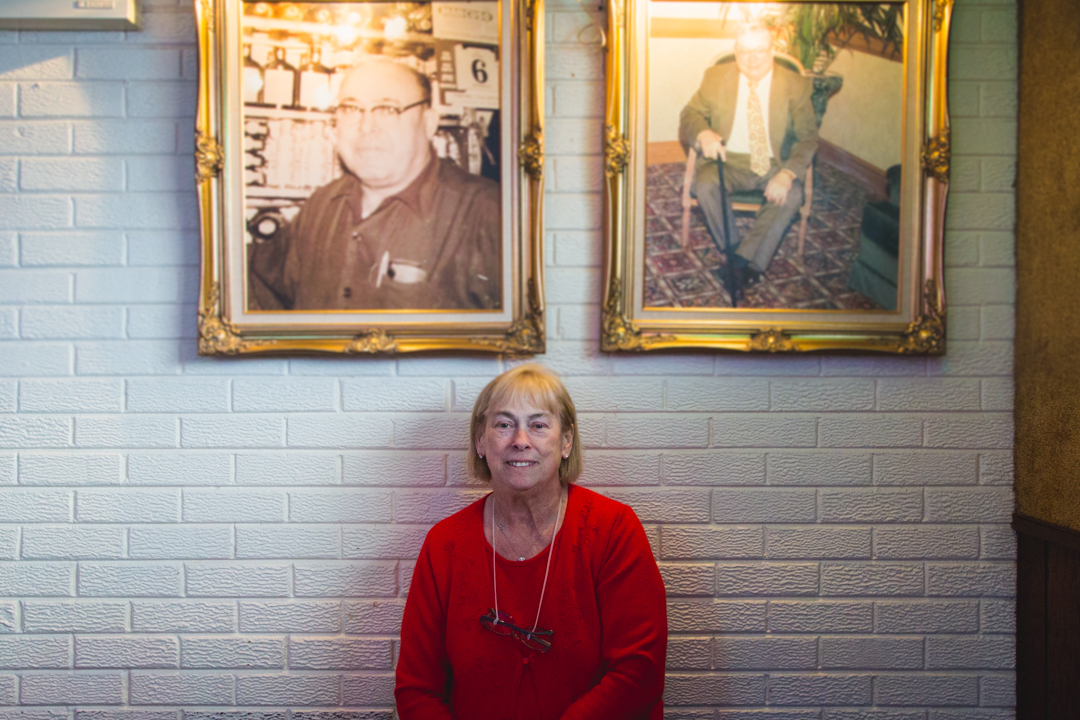 Rose has been a part of Vito & Nick’s ever since she can remember. “I’ve been here all my life,” she says. “I remember drawing my first draft when I was five years old. My grandfather took a beer case and set it on the floor for me to stand on and showed me how to draw a beer.”

And why Old Style? “It’s just the way it was,” she says. “And Old Style beer goes very well with our pizza — there’s just something about it.” 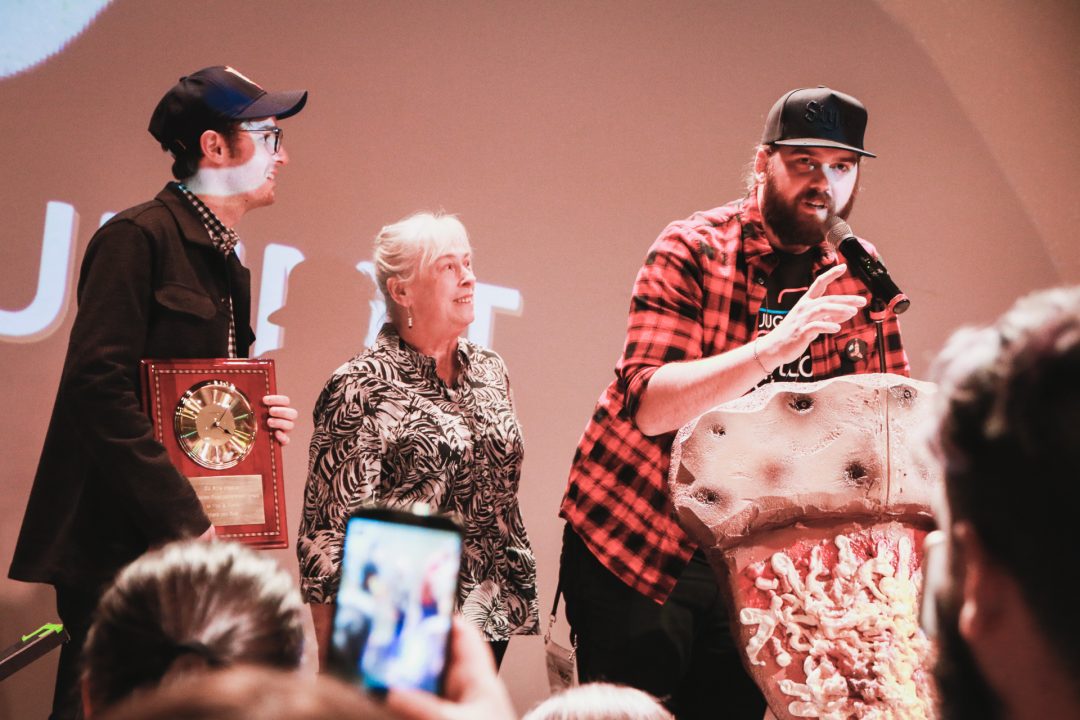 Vito & Nick’s has been at 8435 S Pulaski since 1965 but Rose’s grandfather Vito started Vito’s Tavern back in 1920 on Congress Street near the old Cook County Hospital. “Then about 1926 grandpa moved to 80th and Halsted,” says Rose. “He was there until maybe 1931, at which point they moved to 79th and Carpenter. When my dad (Nick) came home from the service after World War II, it changed to Vito & Nick’s and that’s when the pizza began.”

Walking in, the space seems preserved in time from it’s 1960’s origins. There’s gold shag carpeting along one wall. Three regulars at the bar chat about the latest developments in Chicago sports. And of course, an Old Style sign hangs above the bar. 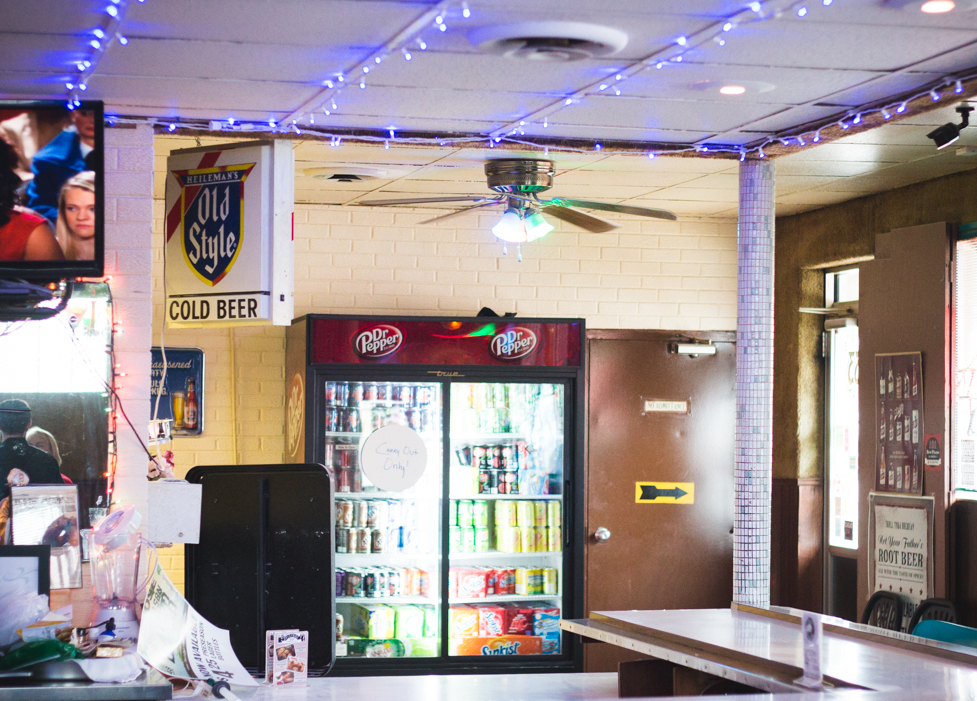 Lakeshore Beverage: So for someone who hasn’t heard of you guys, what is Vito & Nick’s?

Rose: Vito & Nick’s is a family business. There’s lots of children here, we’re very family-friendly. Reasonably priced. We’re number one in the city of Chicago for thin crust pizza, number one in the state of Illinois, and third in the nation.

Rose: Everything is balanced on it. There’s not too much of one thing and not enough of another. It’s just a nice balance of everything. And it’s hard! If you watch them, these guys make the pizza exactly the same way every time because that’s how they’re taught. 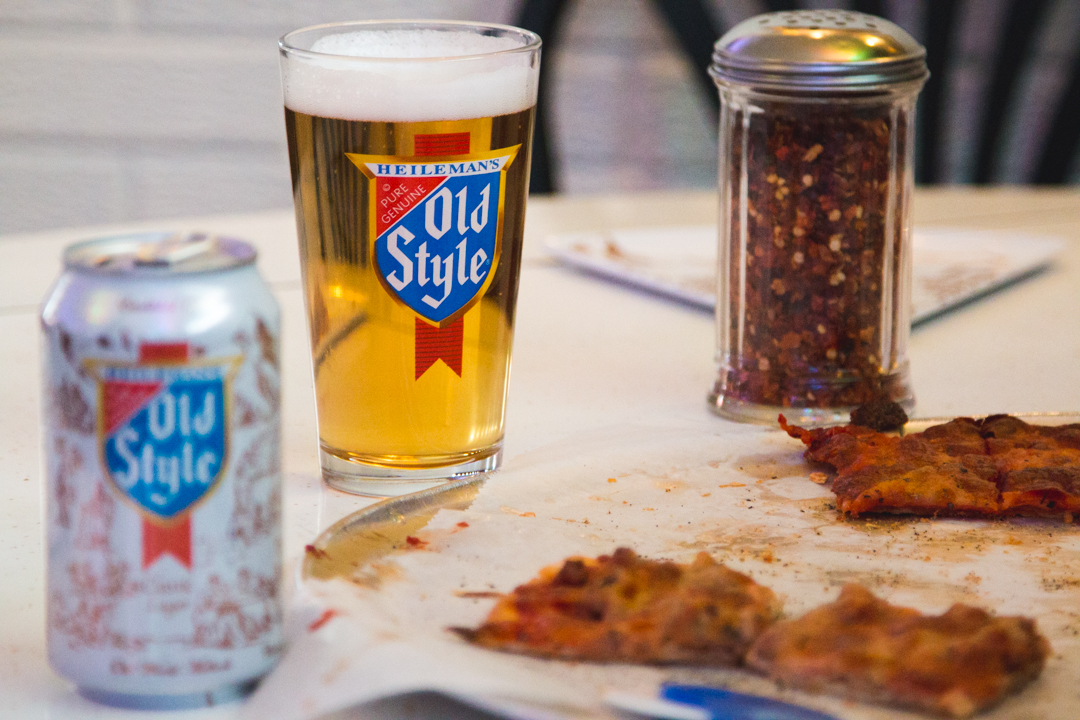 Lakeshore Beverage: What does Vito & Nick’s mean to the community down here?

Rose: Oh we’re a staple for them. We get lots of regulars in here. There’s one right there. He’s a regular. There’s Jim, he’s a regular.

Lakeshore Beverage: And how long has this shag carpet been on the wall?

Rose: Since day one. We get people who come in here and say, ‘I have to rub the gold carpet for good luck!’ and I say OK!

Some people come in here and they look like a deer in the night. Especially, and I hate to say it, the north siders. Haha! They come in and I think it’s a little bit of a culture shock. Am I wrong?

Lakeshore Beverage: No, no you’re not. But how can you tell?

Very easy. I can tell you in a heartbeat. Their strut. The way they dress. Their mannerisms. It’s totally different, they’re not south siders.

Lakeshore Beverage: What do you mean by their mannerisms?

Rose: How they talk to you and how they relate to you. I can tell you this: when someone comes in here, I guarantee they’ll know someone when they leave. That’s how this is, it is very family oriented. And that’s a good thing. 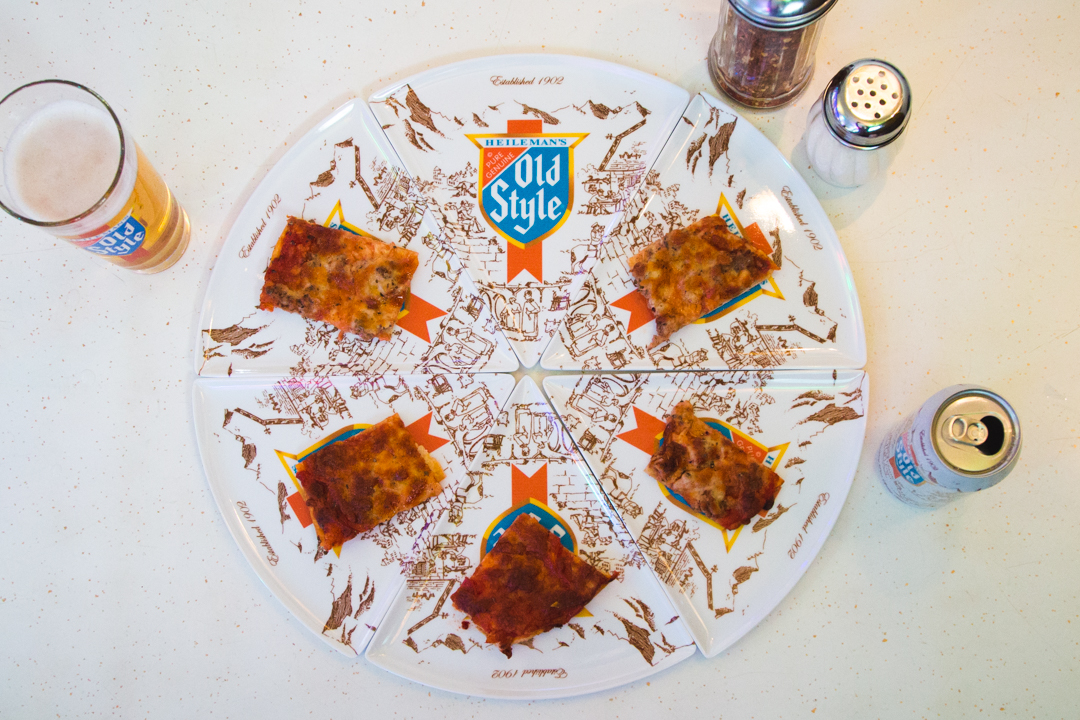 Lakeshore Beverage: Alright let’s get back to the pizza. How many pizzas do you guys go through a day?

Rose: Well it varies, but we go through somewhere between 400-600 a night. It’s a lot of pizza. That’s why I needed that other set of ovens.

Lakeshore Beverage: And as someone who has worked in a pizza place their entire life, do you get tired of pizza? How much pizza do you eat?

Rose: I try and have pizza every day. Whether I try it or I eat some. I’ll always walk by and taste the crust. It’s my favorite, but it’s also quality control. I will know immediately if it’s right.

Lakeshore Beverage: Can you tell us about the sausage here?

Rose: This is my grandmother’s recipe. It was handed down to this company and it’s now the grandson who’s making it to her specs which is registered and trademarked. So it was grandpa, dad, and now son.

Lakeshore Beverage: What is it that makes Vito & Nick’s truly special?

Rose: Consistency. There were a few things my father said to me before he passed. Matter of fact, it was two weeks prior, we were standing in the kitchen and he said, ‘Doll, remember something. You’re out there working for the working class person. They’re your bread and butter. You want them to bring their families in and can afford it and come here at least once a week.’ And the second one was, ‘You never, ever, vary the quality of your product whether you have good times or you have bad times.’ And he’s absolutely right. 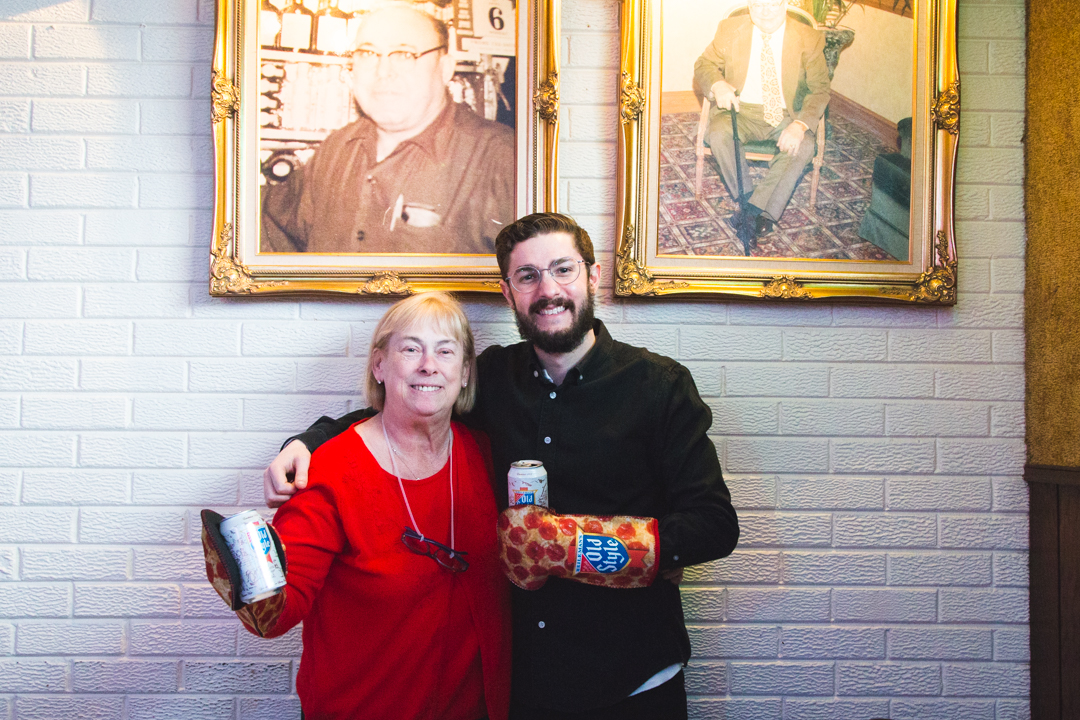 Win Tickets To The Old Style Pizza Summit On 4/9!

Tickets to the Old Style Pizza Summit sold out faster than it took to type this sentence but we’ve got two pairs to give away! We’ll be giving away a pair of tickets to each session (2-5pm; 6-9pm) and the contest will run until Thursday evening. Winners will be notified Friday 4/7.

Vito and Nick’s #1 pizza in Chicago!

My wife & I were there Sunday during the Bears play off game the 6th of January. Not to good for the Bears, but the pizza was very good to my liking. Been going to Vito & Nicks since 79th St. & Carpenter & still love the place. Don”t drink the Old Style, but sure do like there Pabst Blue Ribbon.